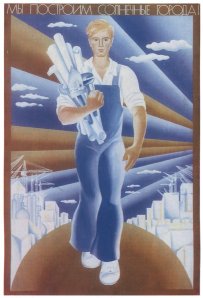 Through institutions of centralized administration, the Soviet Union created a distinctive system of social welfare provisioning and a unique urban world. What has been their fate after the demise of socialism? How have these products of Soviet socialism been affected by neoliberal reforms? And what does the post-Soviet case tell us about neoliberalism? Over the past decade I have investigated these questions through research on Soviet social modernity, Soviet cities, and post-socialist transformation in Russia and the Republic of Georgia.

The Soviet project of state-led industrial transformation was linked to new approaches to planning cities and providing for the daily needs of their inhabitants. In Post-Soviet Social I examined this distinctive form of social modernity by investigating the Soviet paradigm of “city-building” (gradostroitel’stvo). I focused in particular on the planning of small industrial cities, which were an ideal form for Soviet urban planners, who believed that in such cities the pathologies of capitalist urbanization could be overcome. Despite the many well-known problems of Soviet city and social welfare planning, the Soviet Union created a large number of such cities, spread out over its vast territory, and managed to extend to them a comprehensive (if wildly inefficient) complex of urban services.

In the post-Soviet period, these cities were shaken by the collapse of ministerial coordination and the introduction of markets in most goods. My research investigated how neoliberal reforms grappled with these peculiar products of Soviet social planning. Rather than focusing on the much-studied programs of privatization or financial stabilization, I examined “minor” traditions of neoliberal reform that targeted mundane systems that underpinned Soviet social modernity: urban services delivered through networked infrastructures, and systems of budgetary redistribution. Surprisingly, I discovered that in many cases neoliberal reforms served to preserve key social norms and material forms of Soviet socialism.

An enduring concern of my work on post-socialism has been the fate of the Soviet system of social welfare. The Soviet Union created a highly universalistic system of urban social welfare provisioning that was linked to Union-wide mechanisms of redistribution and coordination. The surprising and highly consequential persistence of urban social welfare systems was a point of departure for Post-Soviet Social, which sought to reconcile this persistence with our usual image of neoliberal transformation. I have also investigated the pathways of post-Soviet social welfare transformation using more formalized and systematic research tools. With Lucan Way I conducted an NCEEER-funded project on social welfare transformation in post-Soviet Georgia. Using a household survey instrument, we investigated how different aspects of the Soviet social welfare regimes had changed since Soviet break-up, and explored new regimes of access to social welfare. This work has been written up in an NCEER working paper, “Local Welfare Regimes, Fiscal Crisis, and Institutional Change in Post-Socialist Georgia” as well as in an article published in Post-Soviet Affairs, “Beyond the Deficit Model.”

Another theme of my work on Russia and Georgia has been the intransigence of material infrastructures–from urban heat and water systems to national or transnational infrastructures for transporting gas, oil, and electricity–in shaping the pathways of post-Soviet change. In Post-Soviet Social I showed how material infrastructures articulated a particular regime of urban provisioning that proved very difficult to reform in the post-Soviet period. I also addressed the intransigence of infrastructure in two articles with similar titles but different subject matter: “Pipes,” published in the edited volume Patterned Ground, examined how regimes of urban provisioning articulated by networked infrastructures have made market reorganization a sticky and fraught process. “Pipes and Wires,” written with Nino Kemoklidze, shows how post-Soviet geopolitics has been shaped in sometimes surprising ways by infrastructural connections.